The Kuiper belt (/ˈkaɪpər/), occasionally called the Edgeworth–Kuiper belt, is a circumstellar disc in the outer Solar System, extending from the orbit of Neptune (at 30 AU) to approximately 50 AU from the Sun. It is similar to the asteroid belt, but is far larger—20 times as wide and 20 to 200 times as massive. Like the asteroid belt, it consists mainly of small bodies or remnants from when the Solar System formed. While many asteroids are composed primarily of rock and metal, most Kuiper belt objects are composed largely of frozen volatiles (termed "ices"), such as methane, ammonia and water.


This is how Jupiter protects Earth from asteroids.

Our astro-chemists requires samples from the belt be brought back for further analysis. A science vessel would take too long at sustained impulse. The scout ship is being considered for this mission. It is estimated based on the where Jupiter is in orbit later this year, we should be able to fly out to sector (-120,3). This is where the inner wall of the asteroid belt begins. Initial scans and testing can be done on the scout ship, but a more thorough analysis will be required on a science vessel or a science station. 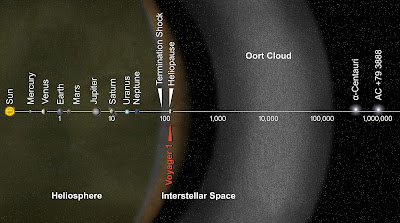 Plans to deploy a crew for this mission are underway. I really hope I'll be selected for this as it will take approximately eight hours round trip on the scout ship. That is to take into effect relativistic time calculation and such. I know we are currently capable of sustaining under warp factor one, I think that's approximately (216,000 km/sec) when we cruise.

Battle drills is essential for surviving if attacked and provoked in open space. That is why we continue to run these drills. Gallifreyscall is a new officer, and so we gave him a tour of space so he could get his head wrapped around the vast distances between anything.

Tomahawk provided moral support on the bridge as we shot down bogies in sector (6,2) on the TSN Excalibur. We are to remain in sector (13,2) to get some rest before returning back to DS02.

A sustained warp drive system means the energy usage remains stable. If we gain energy in travel, we are then considered energy efficient. Otherwise, losing energy while maintaining warp speed means we are not sustainable.

We were able to confirm the Scout Ship can travel 36 sectors in 60 minutes in sustainable/travel  mode.
Posted by Small Business Enterprise Resource Planning at 2:12 PM No comments:

At times on the bridge, we notice some officers will not be so quick to respond to orders or standard operating procedures. These tell tale signs often means they could be off their game that day, or just simply didn't retain the details required to full fill their roles.

This became apparent when a few officers admitted they didn't know how beacons, tags and probes really worked. Since we had a new officer join us, it gave the training sergeant the opportunity to advise us strongly to review the ordnance onboard the science vessel, and run drills.

The team's ability to perform in any high paced scenario requires knowledge of their own and other's station on the bridge. The old adage of, we are are strong as the weakest link applies here. So it was important we took the time to review the operating procedures of these ordnance onboard SC07 with this crew.

It worked out really well, as the all the officers said they needed a refresher regardless if one did know or not. It was a win-win mission!

Science Vessel - SC07
Confirmed Tags, Beacons and Probes usage with crew. Beacons have a 5 minute power source. Tags are used when sensor range is low. Probes can double scan when it goes directly over top of the object.

Preparing for a Deep Space Science Mission. This could mean a persisting a science vessel, traveling over 12 hours from point A to point B for a deep space mission. Using shifts to travel a good distance maybe in order. However, it maybe wiser to fly a scout ship in sustained mode, as it can traverse 36 sectors in 60 minutes at just below warp one.

A new officer was assigned captain of the science vessel SC07 as it was ready for a field test. The other seven science vessels are still under construction or being programmed. The orders handed down were to ensure all systems were functioning on SC07, and to verify the energy efficiency rating was above 90% while traveling at sustainable impulse. These vessels are going to be sent out on long deep space missions in the near future.

I'm curious with how far one of these vessels can really go now! 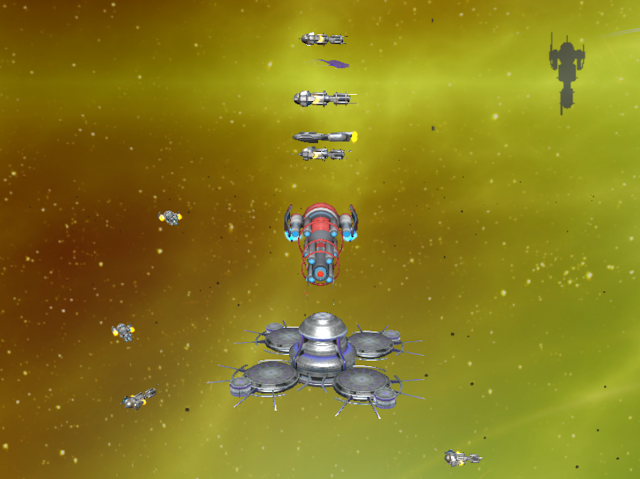 Captain ToxicTwinkie briefed us and off we went. We tagged two space whales, fired several beacons to rescue a pod of whales from the black hole. Probes systems and scanned another pod of whales.

We then flew from DS02 in sector (2,2) to sector (3,2), then back at sustainable impulse. Engineer Xansta confirmed system efficiency was well over 90%. Officer Starry was able to scan multiple space whales in the area.

It was an uneventful mission, but an important one because readying these vessels will allow scientists to learn more about what is out there.
Posted by Small Business Enterprise Resource Planning at 8:22 PM No comments:

I soon discovered why DS02 was ordered to station in sector(2,2). The scientists onboard the station are studying the fauna there. Specifically the space whales.

Scientists have concluded their behaviour as, "Harmless and gentle creatures traveling in pods."

Harmless and beautiful, space whales are fragile and easily killed. A single shot will destroy one, although it will typically "turn away" and fade from sight when shot.

Their translucent appearance could indicate they are made of a gelatinous substance like a jellyfish, or they could be some form of energy. Despite their superficial resemblance to Earth whales, they are obviously not fish, and have no discernible internal organs. Younger, smaller individuals are usually a more aqua color, while older whales are larger, and deep blue. The age of a whale will show up on Science, as "Young", "Mature" or "Ancient".

There is speculation there could be more creatures out there, hence the science vessels have been equipped with one shuttle and beacon technology to attract and repel any fauna they discover.
Posted by Small Business Enterprise Resource Planning at 12:42 PM No comments:

Our duties today included several outcomes for the Admiral. They wanted all eight Cargo ships stowed where the Mine Layer and the Scout Ship was. So we assembled a crew and flew all eight ships down to grid delta five, mark seven in sector (0,0). 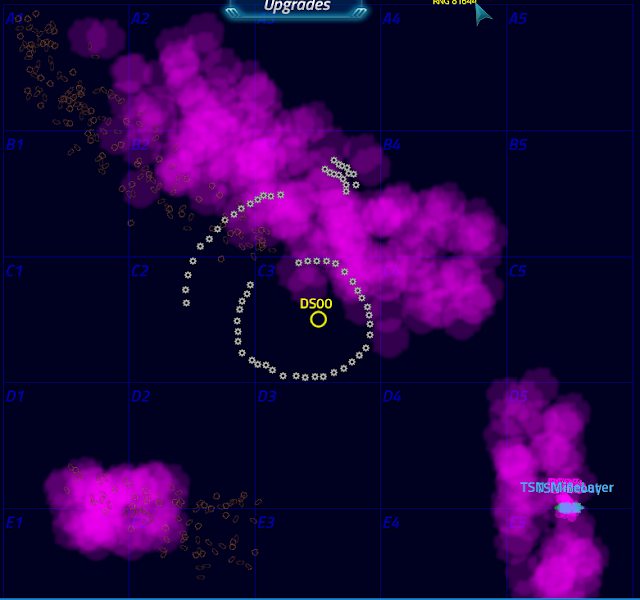 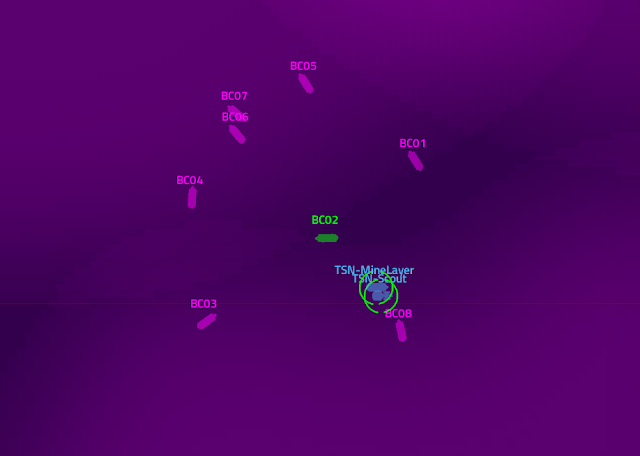 All Cargo operators came aboard the Scout ship where we flew to sector (2,2). While enroute on the Scout ship, we tested out the Emergency DamCon Holograms by activated and deactivating them.  This is where Officer Davis took command of the TSN Excalibur. He seemed excited to have his own ship now. We docked at DS02 and proceeded over. After the ceremony and the official hand off of command of the ship. We did some quick tests before we left dock, then performed a routine patrol of the sectors, followed by a quick battle drill. The vessel operated just as expected! 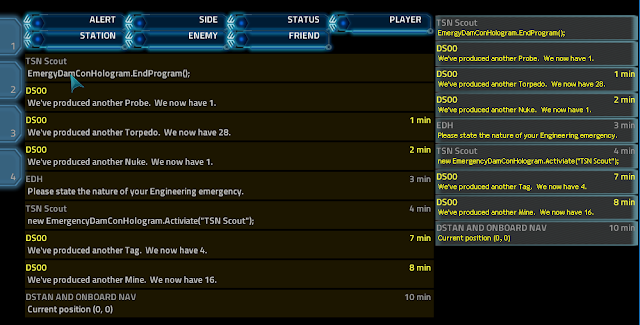 The tests included, new Communication system commands. We can transfer energy from one ship to another, and also activate the Emergency Damage Control Holograms. These new features onboard the Excalibur provides useful when we are far out in space.

Captain Davis realized, event with a well balanced Light Cruiser class, the range didn't allow his ship to go to far. He noted a perimeter of 4x4 sectors, this provided enough energy in the event of combat. Our flight path took us down to sector (2,-2) from sector (2, 2), and then eventually to sector (0, 0) where we docked and finished our duty shift. Even though we have achieved warp speed four, we are still limited with how far out we can still go.

Last I heard, eight new Science Vessels are being built and will be sent off into deep space with both civilian and military scientists.  A Science Base was just approved and construction should begin shortly. Furthermore, additional research is being directed into figuring out how to replenish energy where our faster than light combat vessels can at least refuel.